“PRESTRESSED BUSHES” with turned down sides:

For the same dimensions, this type of bush provides a radial load capacity which is superior to that of the classic “prestressed”.

This takes the form of a rubber sleeve whose external surface is a truncated, and which surrounds a cylindrical internal part to which it adheres strongly by high radial expansion.

Assembly in pairs, in a housing made up of two truncated cones placed small end to small end.

By axial pressure, a high compression is created which ensures the external adherence of the rubber and causes lateral cushions to form at each end of the housing. These cushions ensure resistance to axial forces.

By axial pressure, a high compression is created which ensures the external adherence of the rubber and causes lateral cushions to form at each end of the housing. 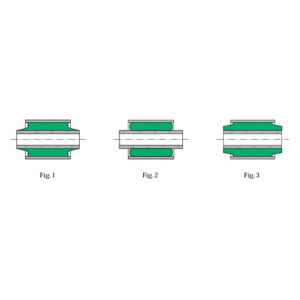 Simple bushes
Thhey ensure an “anti-noise” role at the limit of axial movement.

This is a bush made up of 2 concentric tubes between which of elastomer is bonded. Under the effect of external forces or torques, the relative movement of the tubes will cause an elastic deformation of the elastomer. By consulting the service conditions, a bush should be chosen which will remain within its elastic operational limits.

This is a bush made up of 2 concentric tubes between which a ring of “adhérite®” elastomer is inserted by force. Under the effect of external forces or torques, the relative movement of the tubes will cause an elastic deformation of the elastomer. Above a certain value the adherite will slide in the tubes. 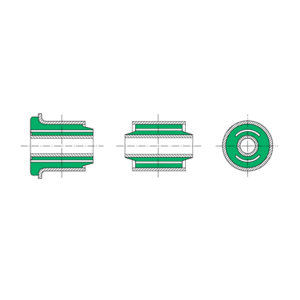 Void bushes
Is designed to have radial stiffness which are very different at 90° to each other.

A void bush is designed to have radial stiffness which are very different at 90° to each other. 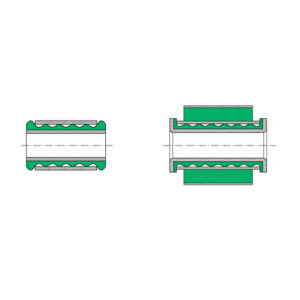 Pivot bushes
This type of bush is intended to offer minimum resistance to torsion.

This type of bush is intended to offer minimum resistance to torsion. The elastomer is bonded to only one of the armatures, and a suitable permanent lubricant ensures the lubrication between the elastomer and the second armature ensures a very low torsional resistance.

Seal sare provided at each end to prevent the lubricant from coming out and stop impurities from getting in.

Resistance to axial force is provided by a flange in the elastomer which bears against the side of the outer sleeve, the force being transmitted by a lateral washer. 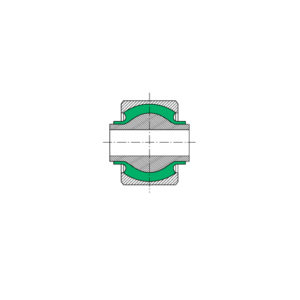 In this bush, the outer sleeve and centre axis are spherical, which enables the bush to resist relatively high radial and axial loads.

This website uses cookies to improve your experience while browsing the website. Outside of these cookies, the cookies that are classified as necessary are stored in your browser, as they are essential for the functioning of the basic functionalities of the website. We also use third-party cookies that help us analyze and understand how you use this website. These cookies will be stored in your browser only with your consent. You also have the option to opt out of receiving these cookies. But opting out of some of these cookies may affect your browsing experience.
Necessary Always Enabled
Necessary cookies are absolutely essential for the website to function properly. This category only includes cookies that ensures basic functionalities and security features of the website. These cookies do not store any personal information.
Non-necessary
Any cookies that may not be particularly necessary for the website to function and is used specifically to collect user personal data via analytics, ads, other embedded contents are termed as non-necessary cookies.
Save & Accept